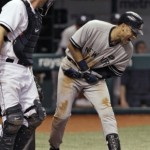 Anyone watch the Yankees game on Wednesday night?  If not, you missed an Oscar winning performance by N.Y. Yankees star Derek Jeter in an important game against Tampa Bay.  He faked getting hit by a baseball pitch and was awarded first base during a very controversial play.  The replay clearly showed that the ball actually hit the end of the bat instead of his hand.

“So what?” you say.  Well, it poses an interesting ethical question.  Was it a good play because it helped his team or was it cheating?  While I don’t believe it is the responsibility of the ball players to do the job of the umpire, does the acting job cross the line?  After the game the opposing manager said,  “If our guys did it, I would have applauded that, too.”  What message does this send to our children?  BTW, the Yankees lost the game.  Karma?  Anyway, I’d like to know what our Coolsmiles parents are thinking.  Derek Jeter, hero or cheater?  I’d love to hear your comments.